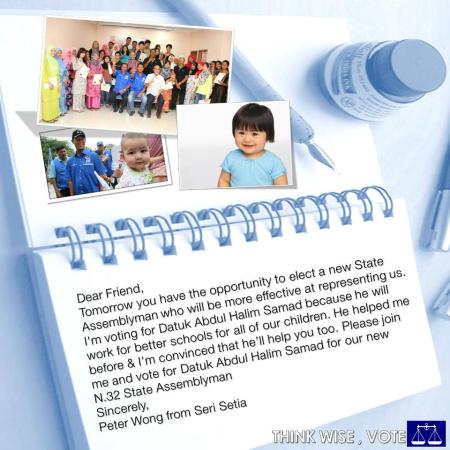 Datuk Haji Abdul Halim Samad, is well known amongst the people in Seri Setia. Most Seri Setia residents preferred Datuk Halim,  if they were to compare him with the current State Assemblyman Nik Nazmi(pkr).

2 days back, at Pangsapuri Damai, PJS 8, we were able to witness the majority of the residents came down and show their utmost support towards Datuk Halim, as the BN Candidate for N32. Seri Setia. When asked, one of the resident said “We are no longer with Pakatan.. For the past 5 years since Nik Nazmi held the position as YB, Nik Nazmi only came over twice!”

Another source state that, PKR is so-called great because once they won, they don’t really care about the lower and middle income people.. but the rich ones are treated like kings.  (Source : Team Media Selangor)